Arizona regulators announced 18 of the 20 available licenses for sports betting on Friday, a day after another lawsuit was filed seeking to stop the process. The approved operators can initiate the registration process effective Saturday, Aug. 28, 2021 – the same day Daily Fantasy Sports goes live in Arizona.

The state regulator plans to launch Arizona sports betting on Sept. 9, the same day the NFL season kicks off.

But the state plans of the NFL launch could be hampered by the latest lawsuit filed Thursday in Phoenix in which the Yavapai-Prescott Tribe asked the courts to stop the licensing process for the launch of Arizona sports betting.

The ADG released a complete list of the professional sports teams/franchises and tribes that were awarded sports betting licenses. All those winning licenses and their partners can begin marketing to customers, effective 12:01 a.m. Saturday.

Under the state law, the agency could have allocated 20 licenses, 10 each to professional sports entities and tribes. But the ADG issued 18, leaving two sports teams/franchises licenses undecided, or rejected.

Earlier this month, the agency had announced it had received 16 applications for tribal licenses and 10 for professional sports.

Though the regulator did not reveal a list of applicants, two IFL teams – the Tuscan Sugar Skulls and the Northern Arizona Wranglers had also applied for the license, as per the reports.

FanDuel and DraftKings – along with Fantasy Sports Shark, FFPC, Yahoo, and Underdog Sports – were approved for DFS in the Copper State.

The NHL Coyotes were the eighth applicant that was approved by the agency, though the hockey league had not listed any partner. According to reports, the Coyotes will go ahead with the “white-label” technology system, using their own brand on the platform.

All 10 Tribes Approved, But Only Six Operators Listed

Sixteen tribes had applied for licenses, and the ADG could only award 10, which went to the following tribes:

The remaining four tribes were listed without their partners:

Gila River – which had partnered with BetMGM, and owns three casinos in the state – did not get a license. The Yavapi- Apache Nation, which allied with PointsBet, is also without a license.

Arizona Sports Betting Another Lawsuit Ahead of the Launch

Meanwhile, the Yavapi Prescott, filed a lawsuit Thursday in which the tribe sued Gov. Doug Ducey, as well as the ADG director Ted Vogt, in Maricopa County Superior Court.

The tribe’s legal representatives asked the court to stop the process and the eventual sports betting launch, claiming the sports betting law violates the state’s Voter Protection Act. The Yavapi Prescott tribe further believes the new sports betting legislation infringes on its exclusivity to provide gaming in the Copper State.

Ducey signed HB 2772 into law in April, and regulators prepared all the rules governing the new industry during that period with a plan to go live this fall.

If Arizona sports betting launches by the scheduled date – Sept. 9 – it will be one of the fastest launches from the time between the legislation and the eventual launch.

It’s not the only lawsuit seeking to stop Arizona sports betting. The first lawsuit was filed in July to the same effect.

Arizona Revised Statutes 13-301. Definition In this title, unless the context otherwise requires, “accomplice” means a person, other than a peace officer acting in his official capacity within the […] 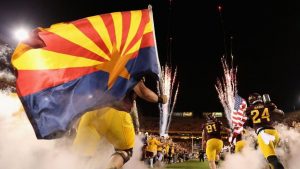 Arizona sports betting will go live on Sept. 9, allowing the residents to place legal wagers on the 2021 NFL season, kicking off the same day. The Arizona Department of […]

Arizona Stakeholders Call For One Skin Per License

Arizona stakeholders on Monday called for a single online skin per sports betting license, requesting the authority to make rules more transparent. On Monday, the Arizona Department of Gaming (ADG) […]