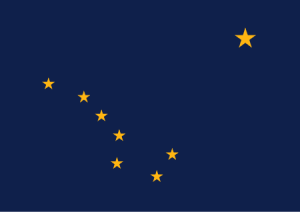 Alaska has some of the strictest anti-gambling regulations in the United States, and this isn’t likely to change in the foreseeable future. Most traditional forms of gambling are banned, and local lawmakers aren’t interested in relaxing the law in response to any developments on the federal level. The last push to legalize betting within state lines came in 2008, but voters were decidedly against changing the status quo.

The local regulations are somewhat archaic and haven’t been updated to address the issue of internet gaming, but the general definition of gambling is broad enough to cover online games. Gambling is defined as “staking or risking something of value upon the outcome of a contest of chance or future contingent not under one’s contingent or influence, upon an agreement or understanding that person will receive something of value in the event of a certain outcome.” The law does not apply to social gambling and home games, but that doesn’t affect the legal status of internet sites that offer real money games.

Unlike land-based gaming, online gambling isn’t covered by the Alaska Statutes and Codes. In essence, the relevant regulations simply haven’t been updated to match the current situation and to keep up with the most recent technological advancements. Consequently, while it’d be next to impossible for an Alaskan business to operate a legitimate online gambling site, there’s nothing to stop local iGaming enthusiasts from joining one of those above offshore real money casinos, sportsbooks or poker rooms. It is worth pointing out that the attorney general expressed an opinion that playing real money games could theoretically be prosecuted under the existing regulations. However, not a single resident has been fined or jailed for playing at an online gambling site so far, and the local law enforcement doesn’t seem to be interested in going after individual players.

Gambling in Alaska is covered by Alaska Code, section 11.66.200, et. seq. Engaging in unlawful gambling is considered a violation for the first offense and a class B misdemeanor for the second and subsequent offenses. A computer or mobile device equipped with gambling software could also be considered a gambling device, which constitutes a class A misdemeanor. In addition, Alaska’s forfeiture law allows the state to confiscate any devices utilized for gambling and any money used as a bet or stake.

Casino-style games are completely banned in Alaska – even the local Native American tribes aren’t allowed to operate gaming establishments that offer slots, video poker, or classic table games. Pull-tab games are legal, but the number of venues that offer them is very limited. There are no regulations on online games, and local businesses are prohibited from operating online casino sites.

Playing on out-of-state platforms is also illegal, even though some offshore US-facing operators accept Alaska-based gamblers. Offshore casino affiliates like to say that there are no regulations specifically prohibiting residents from playing on such sites. Still, while this is true, there’s also nothing to suggest that the state’s general anti-gambling regulations should not apply to internet games.

Betting on games of skill is allowed in Alaska, but unfortunately, local lawmakers have defined poker as a game of chance. As a result, poker is only legal as a social, in-home game.

Online poker has the same status as casino games. Many offshore poker platforms accept Alaska-based players, and their affiliates tend to argue that playing over the internet is legal because the law doesn’t specifically mention online games. Much like in the case of online casino games, this interpretation is flawed as the technology used is irrelevant in determining whether something constitutes illegal gambling in the state.

Many offshore betting sites accept Alaska-based gamblers. However, from a legal perspective, using such platforms aren’t any different from playing online casino games or online poker. Thus, engaging in sports betting over the internet most likely constitutes a violation of Alaska Code sec. 11.66.200.

DFS contests are widely considered to be skill-based, and unlike poker, they haven’t been directly targeted by Alaskan lawmakers. Consequently, participating in those contests on dedicated DFS sites is most likely perfectly legal, and this assumption hasn’t been challenged by the authorities so far. As it stands, all major US-facing DFS platforms, including DraftKings, FanDuel, Yahoo DFS, and Fantasy Draft, offer their services to Alaska-based fans. DFS-specific legislation isn’t likely to be introduced in the foreseeable future. Given Alaska’s track record in other forms of gaming, this is probably a good thing – any potential legislation of this kind would likely be prohibitive.

Alaska doesn’t operate a state lottery and isn’t likely to establish one anytime soon. The only way to engage in legal lottery-style gaming is to go to a tribal venue that offers pull-tab games. Theoretically, residents could use online lottery concierge services to purchase lottery tickets from other states or countries. However, just like online poker, casino gaming, or sports betting, this would likely be considered unlawful gambling.

Pull-tab games aside, land-based bingo is the only form of commercial gaming offered legally in Alaska. The number of venues is limited, with three located in Anchorage and a couple more spread across the state. No state-sanctioned online bingo sites are operating, and while most offshore bingo platforms accept Alaska residents, participating in those games is very likely to fall under the definition of unlawful gaming.

What types of gambling are available in AK?

Alaska has very little to offer to real money gambling enthusiasts – there are no land-based casinos located within the borders of the state, and the local gambling laws are rather strict. Alaska doesn’t have any horse or greyhound racing tracks. Still, bingo enthusiasts are free to enjoy their hobby in one of the regulated bingo halls, with the most famous establishment located in Juneau. Alaska regulations allow gamblers to play social games as long as they’re held on private property. Still, in the end, the best way to enjoy some real casino, poker or sports betting action is to visit one of the US-facing offshore online gambling sites.

Gambling, in general, is covered by Alaska Statutes and Codes, Section  11.16.110, through Section 11.16.270. While none of those regulations refer to online gaming specifically, you should keep in mind that the local authorities are free to argue that Alaska laws still apply to online play. Fortunately, no players have been prosecuted so far.

As mentioned above, online gambling isn’t precisely prohibited in Alaska, meaning that residents of Alaska can play on offshore sites like Bovada without breaking any laws.

Alaska is a rather iGaming-friendly state, which means that any US-facing offshore site will readily accept Alaska residents.

What are the most popular banking options supported by Alaska-facing sites?

The most popular payment methods include credit cards, debit cards, and Western Union/MoneyGram money orders. Please note that the number of sites that support money order payments or withdrawals is minimal. Bovada is an excellent example of a MoneyGram-friendly site.

Is it likely for AK to regulate online gaming?

Unfortunately, the answer is no. Alaska doesn’t have any organized gaming lobby groups, and the local politicians aren’t interested in changing the current status quo.