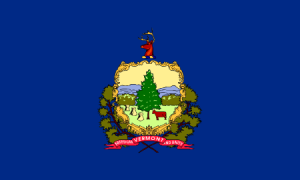 Over the years, Vermont politicians flirted with several forms of gambling, but most of the operations they authorized were eventually shut down. Pari-mutuel betting was introduced to the state in 1959. Except for a short stint at the Vermont State Fair in Rutland, all horse races were held at the Green Mountain Race Track in Pownal, which was opened in 1963.

After four years, the venue started hosting greyhound races. In 1992, greyhound racing was banned, and in 2008, Green Mountain Race Track was ultimately closed down. Off-track betting is still available at the local bars and over the internet.

Vermont launched its lottery in 1977, and in 2015 the local lawmakers authorized the installation of Video Lottery Terminals in 25 bars across the state as a part of a pilot program. One year later, this program was terminated, and the terminals were removed. Thus, Vermont residents have to travel to New York, New Jersey, or Connecticut to enjoy casino-style games, as the Green Mountain State doesn’t have any commercial or tribal casinos of its own.

Vermont Statutes define gambling as “winning or losing money or another valuable thing by play or hazard at any game.” This definition is broad enough to cover internet games, so playing on offshore sites while remaining within state lines is definitely against the law. Engaging in unlawful gambling is punishable by a $10-$200 fine unless the offense is committed in a public gambling house, in which case the penalty may also involve imprisonment for up to sixty days. It’s also worth noting that Vermont law allows losers to recover illegal gambling losses via civil action.

Most gambling-related matters are covered by Vermont Statutes Chapter 51: Gambling and Lotteries. The minimum gambling age is 18 for all forms of regulated gambling.

Vermont laws are very vague when it comes to gambling. The state doesn’t have a precise legal definition of the act itself, but players who participate in unlawful gambling are punished with a fine. The regulations never refer specifically to online gambling, so it’d be easy to argue that they don’t apply to people who play on offshore iGaming sites.

This argument is further reinforced by the fact that the section that criminalizes taking part in illegal gambling activities refers exclusively to games hosted in a gambling house. Quite obviously, it’d be possible for the local authorities to argue that the term “gambling house” can be applied to an internet service. Still, none of these theories have been proven or disproved in the court, as the state simply doesn’t attempt to prosecute individual players.

As mentioned above, there are no casinos in Vermont, so local gambling enthusiasts have to travel to one of the neighboring states to pursue their hobby. Popular destinations include Akwesasne Mohawk Casino Resort in New York, Mohegan Sun in Connecticut, and Atlantic City.

When it comes to online casinos, legal options are limited to social sites. Playing on offshore sites constitutes unlawful gambling and is punishable by a fine of up to $200. To the best of our knowledge, Vermont politicians aren’t planning on introducing legal casino gambling to the state.

Vermont businesses are prohibited from operating commercial poker rooms, so local players have to travel to the neighboring states to participate in tournaments or serious cash games. The largest poker rooms located within driving distance from Vermont include Playground Poker Club (Montreal, 75 tables), Encore Boston Harbor (Massachusetts, 88 tables), and Foxwoods Casino (Connecticut, 147 tables). Home poker games are allowed as long as there’s no rake involved, and all the participants belong to the same social circle. Playing over the internet for real money is prohibited and is punishable by a fine of up to $200. No poker-related legislation has been proposed during the 2019 legislative session.

Vermont lawmakers are currently working on new sports betting regulations. The bill designated HB  484, includes special provisions for mobile betting and extended credit for bettors, but it’s still too early to predict whether it will be approved or not. The legislature is also working on two study bills, which are supposed to help politicians in introducing this form of gambling to the state.

According to the current gambling laws, Vermont residents are prohibited from engaging in any form of sports betting. They are, however, free to participate in off-track horse race betting at the local bars. They also have access to two popular online OTB platforms, TwinSpires and BetAmerica.

Vermont legalized paid DFS contests in 2017, becoming the 12th state to enact such a law. Gov. Phil Scott signed the bill even though major DFS platforms, including FanDuel and DraftKings, have been operating in Vermont in violation of the previous regulations, at least according to Vermont Attorney General’s Office.

Under the new rules, Vermont residents have unrestricted access to all DFS platforms, including FanDuel, DraftKings, Yahoo DFS, and Fantasy Draft.

Vermont Lottery offers both intrastate and multi-state draw games, including Powerball, Mega Millions, and Lucky for Life, as well as Instant Win games. Also, the lottery operates dozens of WinStations, which sell Fast Play tickets. The lottery is prohibited from selling any tickets over the internet, so Vermont residents who want to join in on the action have to visit land-based retail shops.

Vermont charities are allowed to host non-profit bingo games, but commercial bingo isn’t available within the borders of the state. Playing over the internet is also out of the question unless there’s no real money involved – much like in the case of online poker and casino games, using an offshore site is punishable by a fine of up to $200.

What types of gambling are available in VT?

When it comes to land-based gambling, Vermont doesn’t have a lot to offer. The area is devoid of any casinos, and the local racetracks have been closed to bettors in the recent past. The only way to play regulated casino-style games is to take part in charitable gambling. Like many other US states, Vermont runs its own lottery but doesn’t have any locally licensed gambling sites.

The laws that have to do with land-based gambling are all listed in the Vermont statutes. Vermont doesn’t have any dedicated internet gambling laws.

The answer is most probably yes. As mentioned above, Vermont doesn’t regulate online gambling, and the state doesn’t go after players who frequent offshore iGaming sites.

Vermont -based gamblers shouldn’t face any difficulties when signing up with any major offshore sites.

What are the most popular banking options supported by Vermont -facing sites?

All reputable offshore sites support Visa credit and debit cards. Those sites generally allow you to choose between a wire transfer and check by courier when it comes to cashing out.

No. Vermont doesn’t have a regulated intrastate gambling market. The sites that claim to be licensed in Vermont are cheating their visitors, which means that they’re probably also dangerous to play on.

Is it likely for Vermont to regulate online gambling?

Vermont lawmakers have been considering introducing new regulations that’d allow online lottery ticket sales for a few years now, and it’s quite likely that this kind of legislation will be passed in the end. However, the state doesn’t have a land-based gambling industry or a customer base that could sustain a major online gambling operation, so it’s improbable for Vermont to regulate online casino-style games or poker anytime soon.