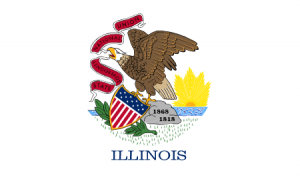 The history of gambling in Illinois dates back to the 1920s when the state legalized betting on horse races held at local racetracks. In 1990, the Riverboat Gambling Act made it legal to run commercial casinos as long as they were located on boats operating outside Lake Michigan and counties with populations over three million people.

The next landmark piece of legislation was passed in 2009 when local bars and other similar venues were allowed to host lottery terminals operated by the Illinois Lottery. No further gambling laws have been passed since then, which means that Illinois doesn’t have a regulated iGaming market.

Illinois law defines gambling as “playing games of chance or skill for money or other thing of value,” which leaves very little wiggle room for creative interpretation. Some people believe that playing on offshore sites shouldn’t be considered unlawful because the issue of online gambling hasn’t been addressed directly. Unfortunately, the local authorities don’t seem to share this point of view – Illinois Attorney General Lisa Madigan, who classified DFS contests as illegal gambling in 2015.

Unlike most of the other US states, Illinois does address some of the issues of online gambling directly. Section 28 of the Illinois code mentions that it’s illegal for people staying in Illinois to operate unlicensed online gambling businesses. However, the law doesn’t list any punishments for participating in online games as a player, which is the reason why most experts agree that playing on offshore sites is perfectly legal for Illinois residents.

There’s a significant push to legalize online gambling and expand land-based gambling with bill SB-0007, which was introduced in 2017. The bill is sponsored by Sen. Terry Link, Dave Syverson, Mattie Hunter, and Donne E. Trotter in the Senate and Rep. Robert Rita, Rita Mayfield, Chad Hays, and Litesa E. Wallace in the House. The proceedings are prolonged, and there’s significant opposition from the local casinos, so it’s impossible to make any predictions regarding specific provisions or the final shape of the bill. The last action on the legislation occurred in May 2018 when the House re-referred it to the Rules Committee.

Casino-style gambling in Illinois centers around ten riverboat casinos, including the Casino Queen or Hollywood Casino Aurora. They are all very similar in size and host more than 10,000 slot machines and 500 table games between them. Other than that, Illinois residents are free to use lottery terminals, which are similar to slots in gameplay and available in over 5,000 bars, restaurants, and drive-ins spread across the entire state. Online gambling is currently illegal, and playing on offshore sites that accept Illinois residents can put you in legal jeopardy. The new gambling bill (SB-0007) could potentially introduce state-sanctioned online casino games to Illinois, but nothing is set in stone yet.

Three of the riverboat casinos (Argosy and both Hollywood casinos) offer play money social gambling options on their websites. Penn National Gaming owns all of those casinos.

Illinois is home to 14 live poker rooms. Some of these are located on the commercial riverboats (Grand Victoria, Pair-a-Dice), while others operate as charitable gambling venues (Chicagoland Charity Poker, Chicago Charitable Games). None of the local venues are allowed to run real money poker sites, but this might change in the future depending on the final shape of bill SB-0007. Playing on offshore sites is just as illegal as playing casino games on those platforms and may result in a class A misdemeanor charges.

Thanks to a bill passed mid-2019, sports betting is now legal in Illinois. Horse race betting has been legal since the 1920s and is available at five of the local racetracks and 37 licensed off-track betting venues. Engaging in sports betting via offshore sportsbooks is illegal, although many of those platforms accept Illinois residents.

According to the most recent opinion issued by Illinois Attorney General, Lisa Madigan, in 2015, DFS contests should be considered illegal in Illinois. This is because the state’s regulations don’t differentiate between games of skill and games of chance when determining whether something constitutes unlawful gambling. However, both FanDuel and DraftKings offer their services to Prairie State residents and deny the allegations that what they’re doing is illegal.

Fantasy Draft and Yahoo DFS also haven’t put Illinois on their lists of restricted states. Illinois lawmakers have been attempting to resolve this situation by passing DFS-friendly legislation. Should they fail to include such provisions in bill SB-0007, or should SB-0007 fail to pass, the situation will likely be resolved with a lawsuit, which DFS companies are almost guaranteed to lose.

The Illinois lottery was founded in 1974 and began selling tickets for Powerball and Mega Millions in 2010. Aside from standard and multi-state draw games, it also provides instant games and raffles. Illinois residents are free to purchase their tickets online, and the lottery even offers some promotions for returning customers. Participating in lottery games hosted in a different country via an online lottery concierge service likely constitutes a violation of the state’s local gambling laws.

No state-sanctioned bingo sites are operating in Illinois, where live bingo is considered a charitable game. Playing on offshore bingo sites that accept Illinois residents is just as illegal as playing on unlicensed poker and casino sites, and it may expose you to class A misdemeanor charges.

What types of gambling are available in IL?

Illinois is considered to be a rather gambling-friendly state, which should as no surprise since the local law allows all the popular forms of gambling. The local casinos include two Harrah’s properties and are spread over different counties. Illinois doesn’t have any noteworthy regulations limiting the availability of certain games, so you’ll be able to try anything ranging from slots to poker there. Other than that, the state allows pari-mutuel horse race betting and operates a lottery, which is permitted to sell tickets online. Other than that, Illinois doesn’t have a regulated online gambling industry.

Gambling in Illinois is covered by Section 28 of the Illinois code. It’s worth pointing out that while some of the Illinois laws do refer to internet gambling, there are no regulations that prohibit individual players from participating in unlicensed games, which makes it next to impossible to prosecute gambling enthusiasts that stick to offshore sites.

Yes, there are no regulations prohibiting Illinois residents from playing on offshore sites, which means that this form of gambling is perfectly legal.

There are no restrictions for Illinois-based gamblers when it comes to joining offshore iGaming sites. All the major operators accept Illinois residents.

What are the most popular banking options supported by Illinois-facing sites?

Most offshore sites don’t give you many deposit options to choose from, which is precisely why the vast majority of Illinois players stick to standard credit and debit cards, such as MasterCard or Visa. Please note that this method is unavailable when it comes to withdrawals, as most offshore operators prefer to rely on wire transfers for this purpose.

Is it likely for IL to regulate online gambling?

Yes. Illinois has already introduced an online gambling bill, which has been approved by the Senate Committee.