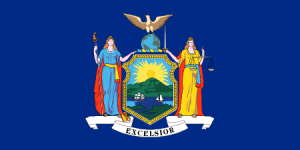 New York boasts a robust gambling industry, which consists of six tribal casinos, four Vegas-style commercial casinos, ten racetracks, and a well-functioning state lottery. Three New York tribes negotiated their compacts with the state soon after the federal government passed the Indian Gaming Regulatory Act in 1988, and they built their casinos throughout the nineties.

The construction of commercial venues was authorized in 2013 when residents approved the required constitutional amendment proposed by Gov. Andrew Cuomo in a referendum. Current regulations allow for the existence of seven commercial casinos, which means that three such establishments are yet to be built.

Gambling in New York is defined as an act of “staking or risking something of value upon the outcome of a contest of chance or a future contingent event not under person’s control, upon an agreement that he/she will receive something of value, given a certain event.” Betting over the internet isn’t explicitly prohibited, and mere participation in an unlawful game doesn’t constitute a crime. Thus, New York residents are free to play on offshore gambling sites without risking legal repercussions.

Due to the size of the local market and amount of wealth generated by the existing casinos, New York has been named among the most likely states to follow in the footsteps of Nevada, Delaware, and New Jersey in legalizing online gambling since at least 2013. Unfortunately, these predictions proved to be way too optimistic as none of the proposed iGaming bills have reached the Governor’s desk so far. Even the recent DFS regulations were challenged by a local court, which went against the lawmakers’ intentions. While the legalization of internet gambling in New York is just a matter of time, presenting even a semi-reliable schedule seems like an impossible task.

New York regulations aren’t very specific when it comes to online gambling, but this issue is mostly irrelevant as, according to Section 225 of the New York code, individual players simply aren’t punished for taking part in unlawful gambling activities. While it’d be possible to argue that some online gamblers could be charged with tax avoidance or something similar, there’s simply no denying the fact that playing on offshore sites is perfectly safe in New York.

Three of the biggest New York casinos are located in Niagara Falls (Seneca Niagara), Verona (Turning Stone), and Tyre (del Lago). Each of these establishments hosts at least 2,000 slots on its gambling floor, while most of the remaining venues offer fewer than 1,000 machines. Aside from slots, the local casinos are also allowed to host table games, keno, video poker, and bingo. What’s more, nine of the New York racetracks give their customers access to Video Lottery Terminals (VLTs), which are similar to slot machines in functionality and looks. State-sanctioned online casino gambling isn’t available yet, but as mentioned above, there’s nothing to stop New York residents from playing on offshore casino sites, such as Bovada or Slots.lv.

Sports betting was approved in New York in the 2013 referendum, which means that this gambling form received the green light as soon as the federal Supreme Court struck down the 1992 ban in May 2018. Now the ball is in the court of the New York State Gaming Commission, which is expected to release its regulations for commercial casinos located outside of Indian reservations. These new regulations must go through a 60-day vetting period, so the first wagers will likely be placed in early 2019. Racetracks and tribal casinos haven’t been authorized to open sportsbooks and are waiting for their own bill, which should be passed somewhere down the road in 2019.

It’s still too early to speculate on the shape of the future regulated online sports betting market in New York, but we expect Bet365 to be among the companies that will shape it due to a partnership deal signed with Empire Resorts, the owners of one of the local commercial casinos. In the meantime, New York residents can only place their online bets via offshore platforms, such as Bovada or BetOnline.

DFS companies were dealt their first major blow in New York in November 2015, when Attorney General Eric Schneiderman issued cease-and-desist orders forcing them out of the state. In early August 2016, Gov. Andrew Cuomo signed a bill legalizing paid DFS contests in the state. DFS operators were back in the Empire State by the end of the month, and New Yorkers currently have access to all the popular DFS platforms, including DraftKings, FanDuel, Yahoo DFS, and Fantasy Draft.

Unfortunately, the story doesn’t end there. In October 2018, a New York Supreme Court judge ruled that the state legislature overstepped its bounds by passing the 2016 DFS law, citing the state’s constitution. Despite this ruling, neither FanDuel nor DraftKings are planning to leave New York without a fight, and a DraftKings representative explained that his company expects the state to file an appeal. However, should this appeal fail, the DFS industry might be driven out of New York for the second time.

The New York Lottery offers both in-state and multi-state draw games, including New York Lotto, Cash4Life, Powerball, and Mega Millions. Scratch-offs are also available, but unfortunately, all tickets must be purchased from land-based retailers as the state hasn’t legalized online sales and isn’t likely to do so in the foreseeable future.

Land-based bingo is available both commercially and as a charitable game, but local businesses aren’t allowed to operate their own bingo sites under the current regulations. Fortunately, playing on offshore bingo platforms isn’t considered a violation in New York, so there’s nothing stopping you from joining any site that accepts US residents.

What types of gambling are available in NY?

New York is an excellent place for land-based gambling enthusiasts, as the state gives you a chance to engage in all kinds of gambling activities. Casino games are available at Indian gambling establishments and the state racetracks. New York also has a state-run lottery and pari-mutuel horse race betting. However, the state hasn’t regulated online gambling yet, which means that the only iGaming sites available from within the borders of the state are run by offshore operators.

All the laws referring to real money gaming are listed in Section 225 of New York statutes. None of those regulations apply to online play, and if that wasn’t enough, the state doesn’t punish individual players for taking part in unlawful gambling activities.

New York-based gamblers might face some difficulties with registering on several offshore sites, but if you already own an account with one of those sites, there’s nothing to stop you from using them.

What are the most popular banking options supported by New York-facing sites?

In most cases, the best way to make a deposit is to transfer the money using your credit or debit card. Visa and MasterCard cards are considered relatively reliable, but you should keep in mind that some American Express cards might be refused. In such a case, using a different card should be enough. Cashing out is almost always handled via a standard bank wire transfer – unlike credit cards, this method is 100% reliable and ensures that your winnings will arrive on time.

No. New York-based are free to play on offshore sites, but the state itself doesn’t offer any local online poker, casino or sports betting services.

Is it likely for New York to regulate online gambling?

New York is quite likely to regulate online gambling over the next few years. The local politicians are well aware of the profits that could be generated by allowing the local businesses to offer iGaming products on the intrastate market.