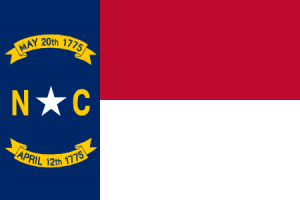 Over the years, North Carolina maintained a very conservative and strict attitude towards gambling. It was the last state on the East Coast to open a lottery, and it never legalized horse or dog racing. Even the compact NC signed with the Cherokees after the federal government passed the Indian Gaming Regulatory Act in 1988 put some questionable constraints on the Indians.

The tribe was only allowed to operate one casino equipped exclusively with slots and video poker games. Fortunately, the state was forced to renegotiate this compact in 2012 due to financial difficulties, allowing the Indians to build a new casino and expand their game selection to include live dealer table games.

The state defines gambling as “operating a game of chance or playing at or betting on any game of chance at which money, property, or other thing of value is bet, whether the same be in stake or not.” Consequently, the local authorities are free to prosecute individual internet players, even though the Old North State doesn’t explicitly prohibit iGaming. Participating in unlawful gambling as a player is considered a Class 2 misdemeanor and carries a maximum penalty of 60 days in jail and a $1,000 fine.

All North Carolina gambling regulations can be found in the North Carolina Revised Statutes, Article 37: Lotteries, Gaming, Bingo, and Raffles. The minimum gambling age is 18 for lottery and 21 for casino games.

There are no state-sanctioned online gambling sites in North Carolina, and the definition of unlawful gambling is broad enough to make playing on offshore platforms risky.

Section 14 of the North Carolina code makes it illegal for anyone to operate any unregulated games of chance that involve money. The state doesn’t have an exemption for home games, and taking part in an unlawful game is considered a Class 2 misdemeanor. However, state regulations never refer specifically to online gambling – and if that wasn’t enough, the state simply doesn’t go after people that frequent offshore casino sites, poker rooms or sportsbooks. Consequently, most people never bother with the nuances of the North Carolina law and simply enjoy the action on one of their favorite sites.

Both of the tribal casinos are operated by Harrah’s. The first, Harrah’s Cherokee Hotel and Casino, is located in Cherokee and hosts over 3,000 slots on its gambling floor. The second, Harrah’s Cherokee Valley River Casino and Hotel is situated in Murphy and is three times smaller. Both casinos also allow their customers to play several classic table games, such as blackjack or roulette. Legal online casino options are limited to international social sites such as Zynga or Double Down Casino.

The only legal way to play live poker in North Carolina is by visiting Harrah’s Cherokee Hotel and Casino, which hosts a 20-table, tobacco-free poker room. The second casino doesn’t offer poker at all. Online poker can’t be legally played for real money in North Carolina – much like local casino enthusiasts; poker fans are stuck with play money sites.

If you get caught playing on an offshore site, claiming that poker is a game of skill and therefore isn’t covered by the general gambling ban isn’t going to save your skin. This argument was already made in 2004 by Howard Fierman, a businessman who filed an injunction against the North Carolina Attorney General, who prevented him from opening a poker club in Raleigh. Fierman lost the case in both the Durham County Superior Court and the North Carolina Court of Appeals, which concluded that “chance predominates over skill in the game of poker, making that game a game of chance under NC. General Statute 14-292 (2005).”

North Carolina doesn’t allow any sports betting, including wagering on dog or horse races and placing online bets via offshore sites. Nevertheless, the Supreme Court’s decision to strike down the 1992 federal ban on sports betting cleared the way for North Carolina’s legislature to introduce this gambling form to the state. While there are many reasons to be skeptical, local lawmakers already caved into financial pressures once in 2012, and sports betting would undoubtedly generate plenty of additional tax revenue for the state. Unfortunately, even if such an expansion successfully passes in 2019 or 2020, it would almost certainly be limited to land-based betting at the local tribal gambling venues.

The DFS situation in North Carolina is complicated. Major DFS sites such as FanDuel or DraftKings offer their services to North Carolina residents, claiming that they aren’t violating any laws as the games they offer are 100% skill-based. This interpretation seems dubious given North Carolina’s stance on poker, but the DFS operators’ point of view is shared by Rep. Jason Saine, who introduced a bill legalizing DFS contests in 2017.

The proposed legislation failed to gain the House Regulatory Reform Committee’s approval, but Rep. Saine didn’t give up and made a new attempt in 2018. This time, his bill (HB 279) managed to reach the House Judiciary Committee. Unfortunately, Rep. Saine decided to withdraw it when Rep. Bert Jones proposed an amendment that would drop the part stating that DFS contests aren’t a form of gambling. This decision killed any chances of fantasy sports legalization in North Carolina. Even worse, the state may soon take action against DFS operators, which would most likely force them out of the local market.

As mentioned, North Carolina was the last state on the East Coast to establish a lottery – the necessary amendment was passed in a referendum in 2005, and the first tickets were sold in 2006. Fortunately, multi-state draw games are available, so residents have access to Mega Millions and Powerball. The lottery is not authorized to sell tickets online, which means that local lotto enthusiasts can only purchase them from licensed land-based retailers.

Bingo in North Carolina is available exclusively as a charity game, and the maximum prize cannot exceed $500 per game or $1,500 per session ($2,500 if there’s only one session per week). Regulated online bingo isn’t available at all, and playing on offshore sites constitutes unlawful gambling.

What types of gambling are available in NC?

Section 14 of the North Carolina code contains all the regulations that govern land-based gambling in North Carolina. However, North Carolina laws aren’t exactly up to date, which means that they don’t cover online games of chance.  Consequently, players who decide to use offshore sites aren’t likely to be accused of any wrongdoing by the local authorities.

Online play isn’t regulated in North Carolina, which means that placing bets via sites like Bovada is perfectly legal.

Playing on offshore sites is legal in North Carolina, which means that virtually every US-facing operator is going to accept North Carolina-based customers.

What are the most popular banking options supported by North Carolina-facing sites?

The most convenient way to begin funding your real money account is to make a credit or debit card payment. The industry standard is for withdrawals to be handled via a wire transfer, but many sites also allow their customers to request a check by courier.

North Carolina is nothing like Nevada when it comes to gambling regulations, so the local gambling businesses can’t offer online casino games or poker on the intrastate market.

Is it likely for North Carolina to regulate online gambling?

No. The local politicians aren’t interested in online gambling and haven’t even attempted tackling this issue after intrastate gambling became possible under federal law.